The pandemic and its lockdowns have been tough enough for everyone in the country who has been going through them since 2020. Relationships of every kind in particular have been strained, as cabin fever tends to make family members, no matter how close, get on each other’s nerves. Fights and communication breakdowns would ensue, sometimes driving grandparents, parents, children, and cousins apart. However, what made the lockdowns bearable–and even enjoyable—for the Legaspina family was their then-new adorable puppy, Callie, who drew them even closer. As her pet parent Czaire describes it, “Callie made our relationship stronger. We would talk about the funny random things she does and send it to our group chat—and now our group chat is more alive than ever!”

Callie is a mix of Japanese Spitz and Jack Russell Terrier

But her father and mother didn’t exactly warm up to the idea for two reasons: they were afraid that the presence of a hairy pet in the house could exacerbate Czaire’s asthma; and they also felt that their little girls were not yet responsible enough to nurture and take care of one.

Callie’s happy influence on the family and her endearing behavior also proved to Czaire’s parents that she and her two sisters, Crixia and Chryx, could take care of a dog. The 21-year-old nutrition student, along with her siblings, had always wanted a puppy to take care of. But her father and mother didn’t exactly warm up to the idea for two reasons: they were afraid that the presence of a hairy pet in the house could exacerbate Czaire’s asthma; and they also felt that their little girls were not yet responsible enough to nurture and take care of one.

Sometime in October of 2020, it was probably the video calls with their friends that persuaded the Legaspina sisters, led by Czaire, to buy a pet dog without consulting their parents. As Czaire narrates it, “When Crixiz was scrolling through Instagram, she came across this shop that was selling dogs for a low price. She immediately showed it to Chryx, and we fully decided to buy a male dog with her own money without our parents’ consent.”

Another simple reason, aside from their own dreams of fully parenting a dog, was “we were unhappy during the pandemic.”

Czaire’s mother also had initial apprehensions when Callie was unexpectedly brought home. Like any other concerned parent, she asked her daughters about the little things of pet parenting—like where Callie was gonna sleep, what she would eat, and what the girls would have her do the rest of the day.

But by the time they recontacted the seller, the male dog the sisters were looking at had gotten sick—and Callie, who was a female, entered into the picture. One look at her and the Legaspina sisters fell in love with Callie on the spot. Czaire recalls her first reaction — it was purely “AWWWWW – like I literally could not explain how cute and adorable she was. Her tongue was slightly showing, and then my sisters asked for some videos of Callie from the seller. Callie also has this cute bow on her upper lip. We were just in awe and would not stop replaying the videos.”

Czaire’s mother also had initial apprehensions when Callie was unexpectedly brought home. Like any other concerned parent, she asked her daughters about the little things of pet parenting—like where Callie was gonna sleep, what she would eat, and what the girls would have her do the rest of the day.

As Czaire remembers now, “That was what hit us and when it finally sunk in!  We impulsively got a dog!”

Czaire’s father, who is working in Riyadh, was discreetly informed of the situation one week after—and along with this piece of news came the announcement of possible appeasement that the puppy would bear the female version of his name, which was Collin.

Aside from the sisters honoring their father, Callie became their new dog’s chosen name “because it means ‘beautiful’ in Greek,” says Czaire, and “Callie is very very VERRRRRY beautiful inside and out especially when you get to meet her.”

As Czaire and her sisters did their homework, taking care of Callie became a bit of trial and error, with fun and humor thrown in for good measure. The seller gave them the right food to feed her. Then, at first, especially during a heavy storm, they made her sleep in the bathtub because the bathroom’s walls blocked off the sound of thunder. But when Callie still shivered her fear, they all moved her to the living room and slept beside her.

During the less stressful moments, Callie is naturally fun to be with and playful. “She is so kulit,” says Czaire teasingly. Since the day they got her, “it has been a rollercoaster ride.” Handing her a handful of french fries can also make her day. During her most affectionate moments, Callie would chew on Czaire’s ear.

Still, what Czaire can never thank Callie enough for is the way that that effortless affection and care stream over to the rest of the family. After her grandmother was released from the hospital after a month in confinement, Callie kept the old lady companion and followed her and Czaire’s grandfather around the house.

“Because of Callie, our grandparents have become more physically active and happy,” Czaire says happily. “That’s why Callie also got the nickname ‘geriatric doctor.’”

While the lockdowns still persist in some form or another, the Legapina family remains happy and emotionally connected, thanks to their little dog. “There is not a day that goes by that Callie does not manage to put a smile on our face,” says Czaire. “I thank her for always making us smile and laugh.”

← Previous: India: the competition-winning Cocker Spaniel who thrives on challenges Next: September's Next Top Pawdel of the Month →

END_OF_DOCUMENT_TOKEN_TO_BE_REPLACED 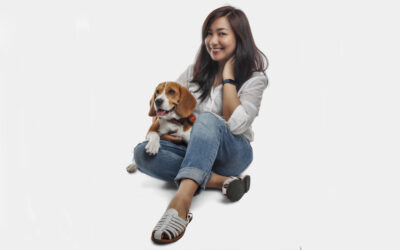 END_OF_DOCUMENT_TOKEN_TO_BE_REPLACED

Keeper, a hit-and-run dog, survived emotional and physical pain and was adopted by a caring animal lover, Dr. Camille Asuncion.